The art exhibitions of the Stockholm Metro 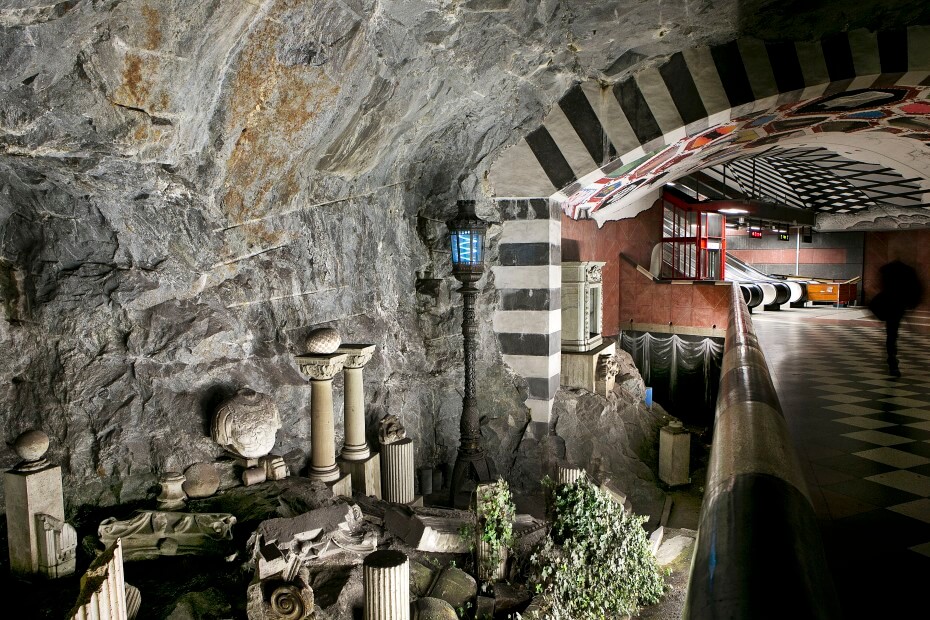 Self-acclaimed as the world’s longest art exhibition, the Stockholm Metro has taken on the double role as both public transportation and art gallery. The desire to provide the metro stations with art was put forward by artists ever since the decision to build the metro was made in 1941. The first line of the metro opened in 1952 without any art, but artists, led by Vera Nilsson and Siri Derkert, didn’t gave up and continued to sway the public and politicians by writing debate articles in newspapers and magazines. In 1956 this gave result when the first competition to provide art for a new metro station was held.

Since then the Stockholm Public Transport (SL) has exhibited art in almost all of their 100 stations. By continuously decorating their stations they have actively provided art over a period of almost 70 years and thus automatically documented the fluctuations of art discourse through their metro stations. For the city and its commuters it could be argued as an accessible common source of information; a lesson in art history while taking the metro.

The relationship between commuters and SL goes further than solely providing art as source of information; it also involves the artist which by creating art for SL:s exhibition gives SL as an institution the role of maintaining the art, not only for their commuters but also for the artist they are representing. Today SL has through the SL Art Council extended their art program to a more direct and active platform for art in Stockholm, by showing a schedule of alternating exhibitions by contemporary artists on certain stations. An action that goes under the name Konstväxlingar (Art exchanges). This initiative enhances all participants part in the circular relationship as the art not only functions as decorating the underground space but act also as active exhibition space where artist and commuters are participating as commoners and SL has the role as a maintaining institution. The institutional framework is created within the Stockholm Metro by SL and the Public transport administration under Region Stockholm. Thereby this action of exhibiting art could be perceived as a cultural common.

The following Case Study investigates if the art exhibition of the Stockholm Metro functions as a cultural common. It will be examined within three parts that each take different aspects in consideration:

Firstly, by giving a historic context to how the initiative to exhibit art came about and view it through the lens of commons theory of Elinor Ostrom. Ostrom’s analyse on what principles and preconditions an institution is willing to adapt to a change suggested by an individual initiative in creating commons will deepen the understanding as to why the initiative by artists to use the Stockholm Metro for art exhibitions could get resonance by SL and the Public transport administration.

Secondly, the specific public space that transport infrastructure provides for a city, as their stations often act as a bridge between public and private, will be examine and evaluated by using the insights of Orvar Löfgren concerning the importance of atmosphere in creating commons.

Lastly, the specific role art has in public spaces will be discussed it in relation to Rosalyn Deutsche’s theories on art and spatial politics. This will deepen the understanding on how art has been used in public space an if the art exhibiting space of the Stockholm Metro can be perceived as a cultural common.

Image 1 –
The station of Kungsträdgården Metro, built in 1977, is an example that highlight the various ways art is shown.

Image 2 –
The station of Kungsträdgården Metro, built in 1977