TYPE Underground commons
LOCATION Vis
STATUS Ongoing
KEYWORDS Appropriation, Heritage, Military Base, Re-Creation
PERIOD 20th Century
USE Appropriation of a space with historical relevance for one group of commoners that is transformed into a place of leisure practices for several groups of commoners or a shelter for fishermen
COMMONERS Islanders, tourists, fishermen
INSTITUTIONS -
REGULATORS -
COMMONING PRACTICES Water, shelter 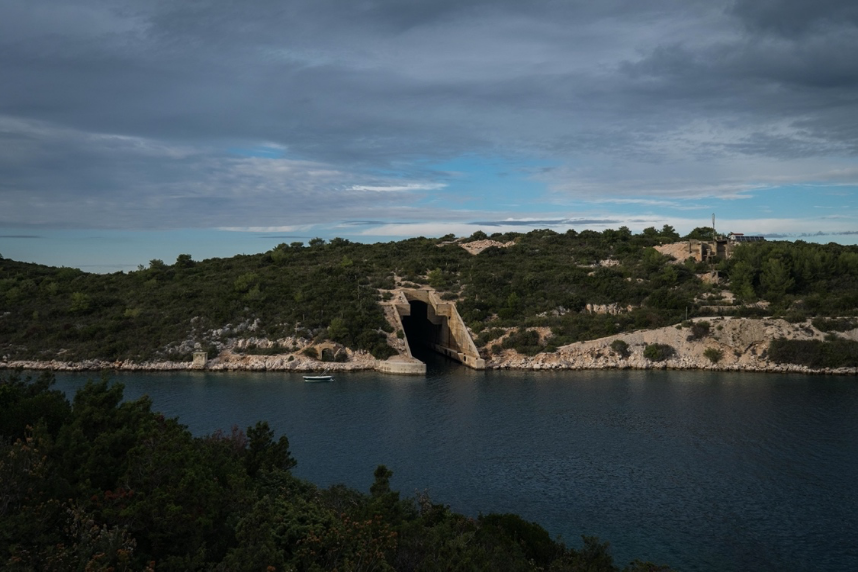 The withdrawal of the Yugoslavian People’s Army from a remote island created opportunities to retrieve what was kept off the public for over 50 years. A submarine pen located at the shore of Croatian island Vis was an important strategic location of the Yugoslavian people’s army. The docking station is the case study to display the emergence of commoning practices within a framework of military heritage. The lack of information on the infrastructure affects the future commoning methods on-site, suggesting questions on the future re-production of the space as a common.

The submarine pen is an artificial cave of about 12 meters height reaching some 80 meters deep into the coast of Vis. The commoners of the space are mostly locals appropriating the location. The site emerged to be a nexus of commoning practices: Locals and travellers exploring the cave by swimming and diving up to its end. One can enter the network of the underground infrastructure through doors on the side of the docking station to either explore it or to get on top of the submarine pen to jump back into it. Commoners get there mostly by boat, which can be attached to the marine bollards. The acoustics of the space, shaped by raw concrete walls and the water’s surface, are also frequently explored by the commoners. During storms, the docking station serves as a shelter for fishing boats as it can comfortably accommodate several smaller vessels.

Governmental influence on site is minimal. Once the property of the state of Croatia, it now was transferred to local authorities. The commoning practices materialize through the reclamation and self- organization of the space, which made it a place of relative autonomy for the past 20 years.
Because of the importance of heritage in the resource and attraction of commoners, it classifies as heritage commons. Even though the post-military society currently using the space is transforming military and militarism, it does not remove them from central positions in the social structure of the islanders.

Since the primary use today is leisure, it further classifies as leisure commons. The submarine base is also a cultural commons, as it is a special environment shared by the community of the islanders, who gained knowledge on the infrastructure over time. All other knowledge is provided through oral history. It thus can also be described as a knowledge commons.

The role of Vis’s tourist industry plays an essential role in the re- creation of the common: many islanders complain that the remains of the Yugoslavian infrastructure are not used adequately or exploit it in a capitalistic sense. They claim that the cost-intensive structure, which is of important sentimental value for many of its citizens, is just left to decay, which also signifies a loss of income for many, as they are dependent on Bunker Tourism.

People claiming the state’s responsibility on developing the spaces implies the public reclamation of the site and the people taking over responsibility for the space and themselves. But while the site as a common is currently constantly re-created, the Bunker’s future is still undetermined and thus, the site’s existence as a common uncertain.

Strömberg, Per. ‘Funky Bunkers: The Post-Military Landscape as a Readymade Space and a Cultural Playground‘, in Boyd, Gary A. Ordonance: War + Architecture & Space, 67-81. Farnham, UK: Ashgate, 2013

Image 1 –
(Re-) Discovery of the Underground: towards a commons

Image 2 –
Swimming in the Submarine Pen