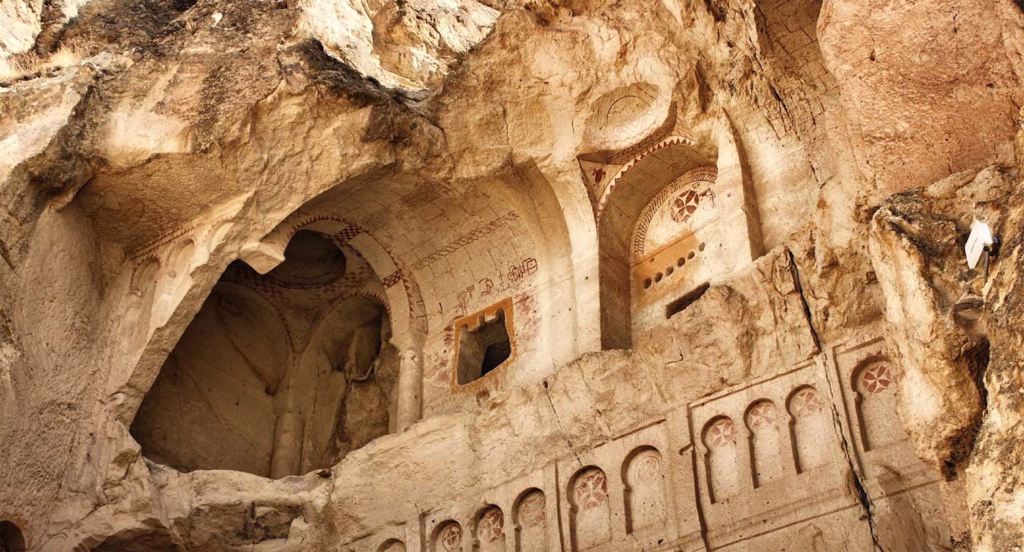 Derinkuyu, an underground city located in the region of Cappadocia in Turkey, is the largest underground shelter in the country, capable of housing around 20,000 people. This tangible common served as a refuge to different religious groups throughout the centuries, and consists of a complex system of tunnels and rooms on up to 13 different levels. The underground city was not only able to protect its residents from attacks, it could also provide spatial services in the form of stables, kitchens, places of worship, as well as a school. The Res Communis of Derinkuyu’s underground city comprises the city, along with its spatial and infrastructural qualities and can thus undeniably be considered as an urban common. Because it was only used by specific religious groups during war-time, it was the commoners, i.e. these religious groups, who formed the Lex Communis, as it was them who regulated the access to the site.

In Tunnelling and Underground Space Technology, a more precise analysis of the region’s geology gives a better understanding of the emergence and development of this underground city. It is thanks to a soft tuff that people were able to hollow out the rock and settle within it. The character of the region’s geology is the result of a complex process dating back to the Neocene, nearly 25 million years ago. Due to eruptions, the landscape was covered with a dense volcanic layer. Throughout the millenniums, the volcanic tuff was then shaped from the wind and rain to what we know today. In the 8th century, the Phrygians, the first settlers, took their cue from nature and began sculpting the rock themselves.

Because Derinkuyu already started growing in the 8th-7th centuries BCE, the spatial formation of the city wasn’t driven by relatively modern approaches such as a formal or functional use of space. Instead, the attention was put on the nature of the site and the works of the precedent residents.

As the city grew, ownership was mostly agreed upon on the basis of mutual consent, being divided among the heirs when a landlord passed away, or being expanded with the agreement of the involved residents. If problems concerning ownership and inheritance persisted, they would be solved either by arbitration or following the existing property laws. Thus, and contrarily to the urban patterns above ground, the underground city of Derinkuyu wasn’t shaped by formal boundaries but was rather formed though informal processes which didn’t depend on any established regulations nor principles. In other words, the Praxis Communis, along the Lex Communis were very dependent on the exceptional location of the site.

It was only in the late 1960s that a detailed cadastral plan of the area was ordered by the government, in order to ‘enhance environmental management’1 and promote more sustainable practices. As a result, the basis of the Lex Communis, which had been very informal up to that point, was reinforced.

Erdem, A, Tunnelling and Underground Space Technology, Subterranean space use in Cappadocia: The Uchisar example, Elsevier, 2008

Image 3 –
Facade of a church